WFP is a ‘Fire Safety and Security’ national finalist!

We’ve been shortlisted for the ‘Fire Safety and Security Project of the Year’ at the Electrical Review Excellence Awards 2019 for the fire detection and voice alarm upgrade at the £134m, nine-storey Central London office building, Condor House.

This follows the Safety and Health Excellence Awards in March 2019, where we were also UK finalists for ‘Project of the Year’. We’re incredibly proud to have been acknowledged on these national platforms, side-by-side along some great names in the industry.

Following a gruelling seven months of intricate work, involving the replacement and installation of more than 900 smoke detectors, 600 interfaces and more than 1,000 speakers, the project finally came to a close at the end of January 2019.

And what better icing on the cake than to be a finalist for  ‘Project of the Year’!

Hats off to WFP’s Contracts Manager, Scott Wright, who project managed the upgrade to an Advanced fire alarm system, and spent months preparing, building and programming prior to the physical fitting.

With an occupancy of approximately 800 people, the real challenge was carrying out an elaborate, invasive takeover without actually being invasive and disruptive to the building’s day-to-day operations.

And, suffice to say, most of the tenants didn’t even know the job was taking place!

“The project to replace the entire fire alarm and public address systems had many challenges, the way WFP planned the works and then implemented the program meant that the project ran very smoothly…

“Any issues that arose during the project were addressed very quickly. Information was communicated concisely and promptly, disruption to the building occupiers was minimal; in fact, people hardly noticed the works. These large building fire alarm replacements are never easy, but Scott and WFP made it look so.”

What makes this project so impressive is that the old system (a Simplex system) was fully functional throughout the upgrade; i.e. at no point was the building left unprotected from fire detection. Of course, with up to 800 people coming and going throughout the building, we had a duty to ensure the protection of the building at all times during the upgrade. 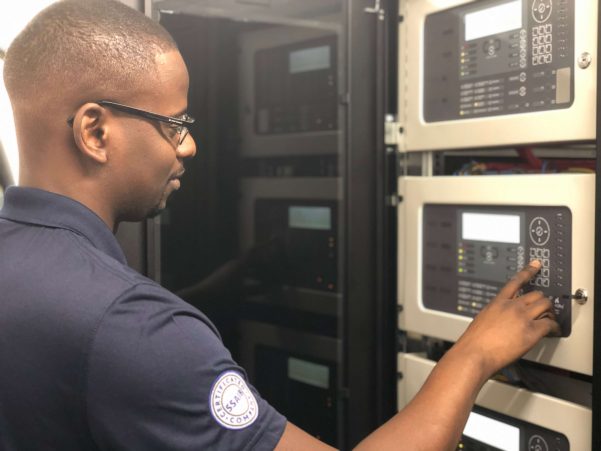 Our engineer, O’Neill, testing the fire alarm at Condor House

Another impressive aspect of the job was the level of intricacy with the cause-and-effect programming.

Cause-and-effect programming to you and I is whereby, for instance, a detector is triggered in a particular room and this would automatically trigger the opening of an AOV smoke vent to control the ventilation of the smoke in the event of a fire (or another fire protection device). Clever, eh?

Now imagine if you had to implement a variety of different cause-and-effects, and test them, all within a limited time frame and in a building of this scale!

We’re a specialist fire alarm company with expertise in installing and upgrading fire alarm systems in buildings both big and small.

Hi, I’m Verity! WFP’s Head of Communications. As well as ensuring our customers are happy with their service, I’m a huge fan of spreading the word about fire safety and security to help keep businesses safe and legal.

Sign up today to stay in the loop with WFP.

FREE SAFETY ADVICE FROM THE EXPERTS

Sign-up to receive safety advice and security tips for your business, delivered by WFP experts straight to your inbox. 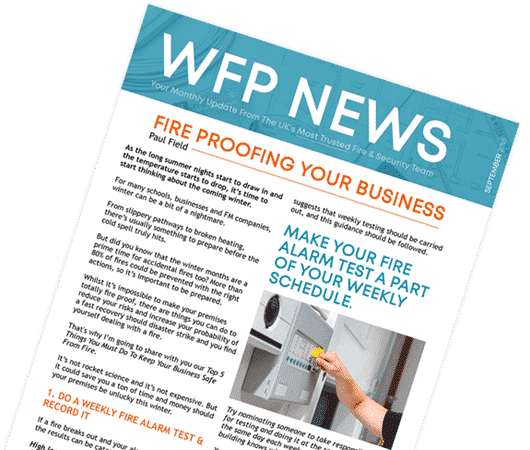 Request a call back to book your survey!

Simply fill in your details below and tell us how we can help you! A member of our friendly team will call you back as soon as possible to arrange a survey of your building, which will help us understand your individual needs before quoting.